What Is The Difference Between Wrongful Death And Medical Malpractice

Wrongful death refers generally to a situation where a person’s carelessness results in the death of another person.

Medical malpractice refers to a situation where a medical provider’s carelessness results in injury to a patient. 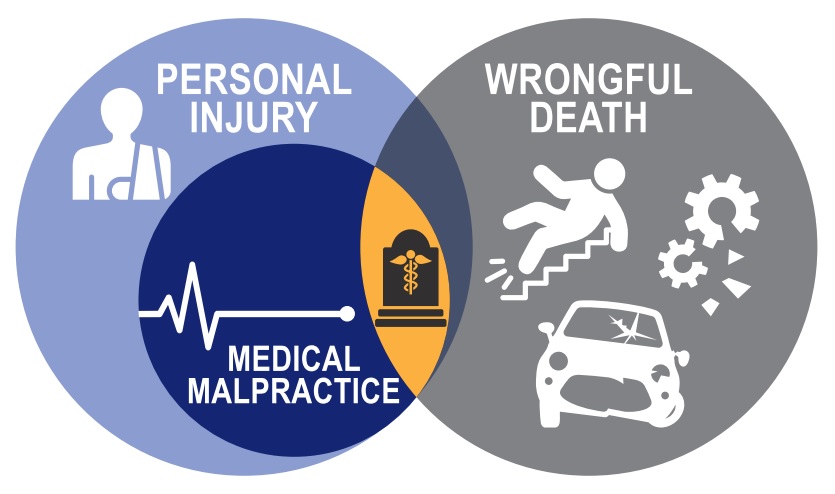 Medical malpractice occurs when a medical provider fails to provide reasonable care under the circumstances. The term “provider” includes doctors, nurses, surgeons, members of a surgical team, or to any other individuals who render healthcare services, as well as to medical facilities or hospitals. To meet the legal definition of medical malpractice, all of the following elements must be present:

The cause of the injury can vary widely, from errors in medical diagnosis, to improper treatment, inadequate surgical aftercare, implementation of unsafe and/or unsanitary practices, subpar facility management practices, and much more.

When a medical malpractice action is filed in court, damages may be sought to compensate the victim for their injuries. Damages include both economic losses such as medical bills and lost wages, and non-economic harms such as pain and suffering.

A wrongful death case is a civil case – not a criminal action – against a party who can be held legally responsible for the victim’s death. A wrongful death claim is brought by the personal representative of the deceased person’s estate. It is brought on behalf of the deceased person’s family (spouse, children, parents, and other next of kin). The damages sought in such a case are for the injuries suffered by those family members as a result of their loved one’s death.

The Intersection of Medical Malpractice and Wrongful Death

When someone dies as the result of medical negligence, two claims arise. First, there is the medical malpractice claim. This claim is for the injuries and damages suffered by the patient from the time of the negligence up until the moment of death. This would include all pain and suffering experienced by the patient and all medical bills incurred. Even though the person died, their medical negligence claim “survives” them and may be brought by the person’s estate. For that reason, such a claim is often referred to by lawyers as a “survival claim.”

Second, there is a wrongful death claim. As discussed above, that claim is brought by the personal representative of the deceased person’s estate to compensate the family for their losses.

A couple of examples will help to illustrate what can be a complicated situation.

Paul has a small lung tumor. As a result of negligence, the tumor is missed on a chest x-ray. Two years later, Paul has trouble breathing, and another x-ray is done. This time the tumor is much bigger. He is diagnosed with lung cancer, but by the time of the diagnosis, the cancer has spread to other organs, and there is no way to save Paul’s life. Paul endures significant pain and suffering for eight months and then dies from the cancer. He also incurs hundreds of thousands of dollars in medical bills. Had Paul been diagnosed earlier, he would have survived and would not have incurred those bills.

In this case, Paul has a medical malpractice claim. Had he survived the cancer, he would have been able to bring this case on his own and sought damages for his pain and suffering and his medical bills. When he dies, his estate can bring this claim. It “survives” Paul. A claim like this may be a very significant claim, as Paul suffered significantly and incurred large bills.

In addition, Paul’s estate can bring a wrongful death claim. Paul was an only child, never married, and did not have children, but his parents may seek damages for their mental anguish resulting from Paul’s death.

Joan goes to the emergency room at her local hospital with chest pain and difficulty breathing. The emergency room physician fails to consider the possibility that Joan is having a heart attack and sends her home with no testing and a diagnosis of “panic attack.”

Joan drives home, walks in the door, and grabs her chest. She is dead in less than a minute of a massive heart attack.

In this case, just as in Paul’s case, there are two claims. Here, however, the medical malpractice or “survival” claim is not nearly as valuable, as Joan’s pain and suffering were much more limited than Paul’s eight-month, painful decline. In addition, Joan has incurred no medical bills as a result of the negligence. On the other hand, Joan’s wrongful death claim may be more valuable than Paul’s. Joan died leaving a spouse, two minor children, and several siblings to whom she was very close. All of these people can seek damages as the result of Joan’s death.

Medical malpractice claims are complicated, and when they also involve wrongful death claims, they are even more complicated – and more harrowing. Whatever your situation, the dedicated medical malpractice and wrongful death attorneys at The Eisen Law Firm have the experience, compassion, and track record of success to help. We proudly serve the State of Ohio and the Cleveland area, so please don’t hesitate to contact us online or call us at 216-687-0900 to learn more today.