Placental abruption (also known as abruptio placentae) is a rare condition but is the most common cause of bleeding during pregnancy, and it is considered a major obstetrical emergency. Placental abruption is one of the leading causes of maternal mortality and morbidity. Placental abruption occurs when the placenta separates from the wall of the uterus prior to the birth of the baby (this separation should not occur prior to delivery). 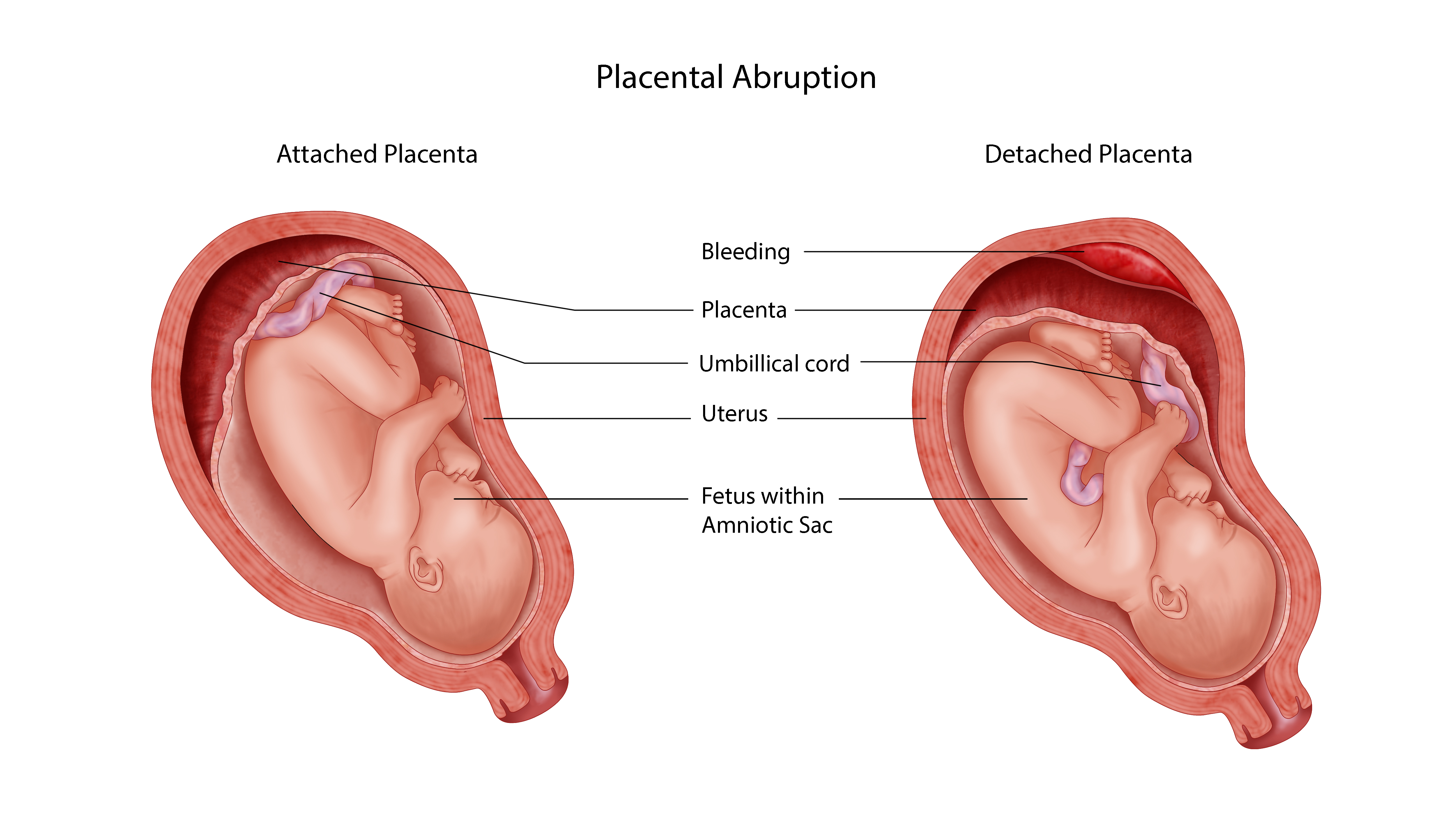 The specific cause of placental abruption is generally not known, but there are risk factors known to be associated with this condition. These risk factors include:

Placental abruption can put both the mother and fetus at risk. Risks to the fetus include IUGR (intrauterine growth restriction, a condition where the fetus’ growth slow or stops), early delivery, anemia, RDS (respiratory distress syndrome) in up to 50% of infants, and coagulopathy (blood does not clot adequately). Additional risks include fetal-maternal hemorrhage, a condition where the blood from the fetus enters the mother’s circulation. This can lead to stillbirth, neurologic injury in the fetus, or neonatal death. Placental abruption can also lead to postpartum hemorrhage in the mother, which then can cause maternal hypovolemic shock. Postpartum hemorrhage is usually defined as a loss of greater than 500 ml or 1000 ml of blood within the 24 hours following childbirth. Hypovolemic shock is a form a shock caused by lack of fluid volume within the circulatory system. Hypovolemic shock can cause low blood pressure and elevated heart rate. The low blood pressure, in turn, can cause damage to internal organs, especially the kidneys. Another complication of placental abruption is DIC (disseminated intravascular coagulation), a severe, life-threatening blood-clotting disorder.

Signs and Symptoms of Placental Abruption

First and foremost, the mother’s physician must take note of any risk factors for placental abruption. Risk factors that can be modified (for example, smoking and drug use), should be modified. Although 70-80% of placental abruptions present with vaginal bleeding, the other 20-30% do not present with visible bleeding. The mother should be instructed, by the 20th week of pregnancy, to immediately notify her physician of sudden onset bleeding, any spotting, back and/or abdominal pain, or constant contractions.

Placental abruption is a medical emergency, and successful treatment for both the mother and fetus depend on immediate institution of appropriate treatment. This treatment can include IV fluids to replace lost blood/fluid volume to ward of hypovolemic shock and kidney injury; transfusion of blood products to replace the high blood losses which can occur in this condition; and close monitoring of both the mother for signs and symptoms of shock, and the fetus for signs of fetal distress. This close monitoring will alert healthcare personnel of the possible need for emergency C-section in the case of fetal distress.

Failure to educate the mother regarding signs/symptoms to report to the physician, failure to monitor and control blood pressure, failure to educate on the effects of smoking and drug use, failure to hospitalize and closely monitor when warranted, and failure to proceed to C-section if necessary, are all situations where the physician/healthcare has not met the standard of care for the mother and fetus. Not meeting the standard of care is medical negligence. And medical negligence cases are the only type of cases The Eisen Law Firm handles. For instance, we recently settled a case where the nurses and doctors who were caring for the mother failed to monitor the condition on the baby and diagnose placenta abruption resulting in the baby’s death. If you have had complications arising from placental abruption or maternal-fetal hemorrhage, please contact The Eisen Law Firm for an evaluation of a possible birth injury claim. To schedule a free consultation to discuss your case with our excellent birth injury attorney, call 216-687-0900 or contact us online.